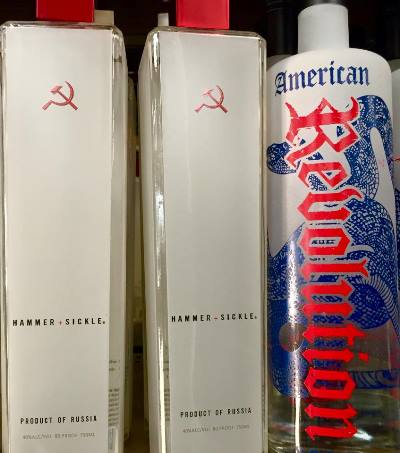 To understand alcohol laws, taxes and sales in America is almost impossible. Laws and regulations vary by State, and in Virginia we're taxed at the third highest rate in the country. Liquor can only be bought in State controlled liquor stores, not in grocery or convenience stores. In Pennsylvania, you can't even buy beer at your local market, and there's a limit on the number of packs you can purchase during a single visit. The strictest laws of the nation exist in this area. In the South, there are still several "dry" counties, where all alcohol is prohibited. All of this in the decadent, spirtualless West! :) During a Friday night visit to the liquor store, I came across these two bottles, sitting beside each other on the shelf. I wonder which is tastier? There are a lot of Russian vodkas for sale in U.S. liquor stores, but we tend to like flavored vodkas more than the plain stuff. In general, attitudes and laws toward alcohol vary greatly between our nations.
( Read more...Collapse )